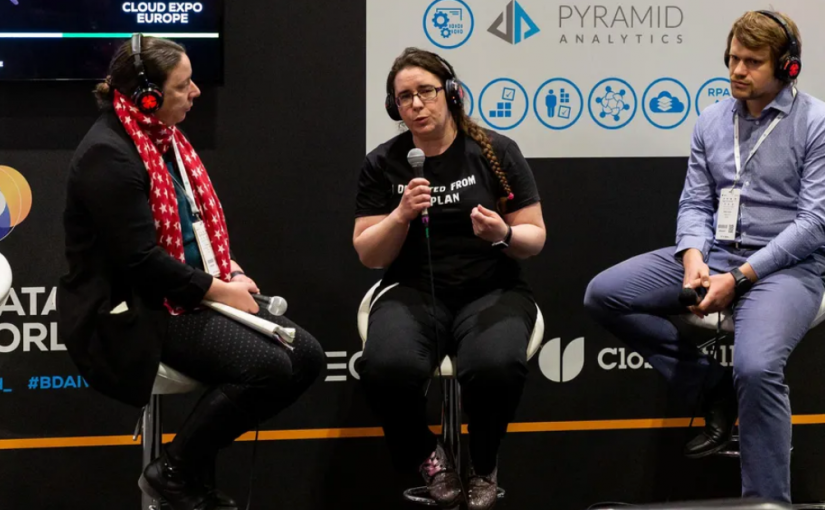 October has always been a super busy month for me. I’m usually starting a new OU module and travelling around speaking at conferences and meetups, all while doing my day job, spending time with my family and enjoying my hobbies. Sometimes I’ve not got the balance right! 2019 I remember was particularly hectic. I optimistically submitted conference sessions at the start of the year on a variety of different topics and, as the year went on I was invited to speak at various meetups in the UK and even stepped in to do some last minute presentations where other speakers had dropped out. This time last year I had just finished 8 weeks where I had a week’s holiday, spoken at 5 conferences, 2 breakfast briefings and 8 meet ups, all of which were on slightly different topics!

I really enjoy speaking at these events, otherwise I simply wouldn’t do them! As an attendee I get to learn from my peers and be inspired by steps forward in areas that I just don’t have time to keep up to date on. As a speaker, I get to pass on some of the things I’ve learned over the years in what I hope is an entertaining way, and I always love the conversations after the talks.

This year has, inevitably, been very different. February was my first event, where I spoke at The European Information Security Summit in London on the risks that Deep Fakes pose to the security sector. I spoke to a lot of security professionals at the event who were unaware of how AI was progressing in both voice and face cloning. As an attendee, I learned a lot about the state of security in many of the systems we take for granted. If you can justify the time and cost, attending a conference outside of your area of expertise can be incredibly informative.

A mere few weeks later, and I had several sessions at Big Data and AI World. I had a panel session with the amazing Sue Daley and Vitaliy Yuryev on why basics are often overlooked in data projects, followed a few hours later by my main presentation on learning from projects that go wrong. This was the 12th of March. While the organisers were doing everything they could, practically all the international speakers and attendees had decided not to attend. The sessions were reorganised to prevent large gaps in the program and many of the sessions I had been personally looking forward to were no longer happening. I really enjoyed both my sessions and got some great questions after them, but it was clear that people were nervous about the crowds and conferences and meetups would be on hold from that point onwards.

As I headed home on the train that afternoon I knew I wouldn’t be back in London for a while. My company was considering a trial of homeworking for a few days a week1, but I’d already decided to swap to home working for the foreseeable future and told my team to do the same if they wanted. My team had been at the conference with me and I didn’t realise then that it would be the last time I’d see them2.

March and April would normally be the time that I would be submitting keynote suggestions for the Autumn conference season and spending my evenings talking to University students at meetups and I really missed those interactions.

While I was interviewed over the summer (Humans of AI, Agile Data Science), I really did miss the chance to interact with a wider audience. You can’t respond to questions in a pre-recorded video.

I was delighted when Barclays Eagle Labs asked me if I would rerun a talk on Deep Fakes that I had given in person late in 2019, as a series of three online events. Despite the strangeness of talking into a camera without the feedback of the audience’s faces and the ever present anxiety that one of my neighbours would start noisily doing DIY during the session3, it was great to see so many people take 30 minutes out of their day for three consecutive weeks to learn. After the final session, I got a lot of messages from people who had made their own fakes and really understood both the positive and negative aspects of the technology and thanking me for making it accessible. It’s this type of interaction that makes these events worthwhile. Sadly these sessions were not recorded, but the slides are on my slideshare (Part 1, Part 2 and Part 3) and a variation of the talk that I gave at Tech Exeter in 2019 is available on sitepoint.

At the end of September, one of the events that was cancelled from March was resurrected as an online event sponsored by DevelopHer. I had 5 minutes, which is both an eternity (if you’ve ever heard Just a Minute) and the blink of an eye (if you have more than a single thing you want to say)! I managed to condense the 25 talk on getting into Data Science and AI into (just over) 5 minutes alongside an amazing line up of other women in AI.

What really stood out to me from this event is how many people attended who may not otherwise have been able to go to an in person meetup. Not everyone has the luxury of being able to stay late after work, or travel in for these events, or may not want to even if they could. One of the huge benefits of everything moving online is that it has made many of these events far more accessible, and I hope that this continues in some form.

Last week I spoke at the online version of one of my favourite conferences, Minds Mastering Machines. The invite advertised me as one of their veteran speakers :D. I’ve done some heavily technical talks at their event over the past few years, but for 2020 I decided to be a bit lighter and given world events I’m glad I did. One of the things I’ve noticed in all the projects I’ve led, advised on, or done due diligence for, is that testing never seems to be a priority for data science and AI. This is something that drives me crazy so I thought I’d approach it in a light hearted way and try and convert the attendees to testing thinking with a talk titled: Your testing sucks – what should you be doing? I paired seven best practises of testing thinking alongside examples (mostly) from spacecraft. I think it went down well and hopefully it was memorably enough to make people want to make time for testing by remembering the various missions.

While I’ve nothing else planned for this year or even 2021, I intend to speak at more conferences. Even when large gatherings are safe again, I hope that there will still be online streams for those that cannot attend. Let’s keep tech accessible.

One thought on “Conference season online”